In this episode of Sound Design Live I speak with Bob McCarthy, author of Sound System Design & Optimization and Director of System Optimization at Meyer Sound. We talk about variable acoustic architecture, why we must optimize before we mix, and how to prioritize our system check list. We also discuss why graphic EQs are useless, common misconceptions about stereo, the pitfalls of L/R stacked subs, why sound is so difficult to teach, tips for finding on-axis points and relative splay angles between speakers, wireless microphones for measurement, hardware and software measurement systems, and how to get what you want without humiliating the client. Hold on to your hats and bring a snack, we have a lot of ground to cover. 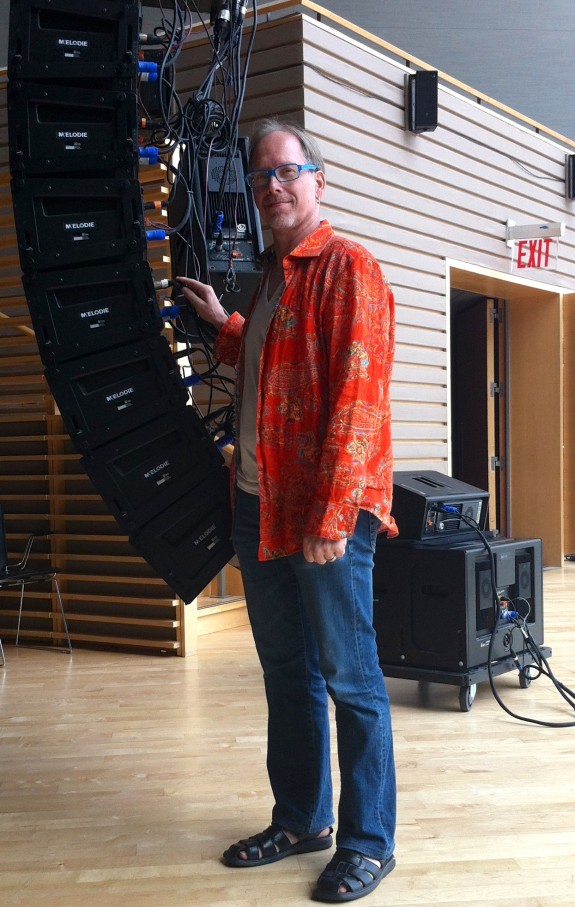 Details from the podcast:

I recently wrote the forward for an eBook that Nathan Lively has published called Sound Design Live: Build Your Career As A Sound Engineer. It’s a great read and I’ll include the forward below.

Audio engineering technology has changed, but the work is still all about connections. Not through CobraNet®, Dante or AVB but rather the personal connections of telephones, email, social media and old-fashioned face to face. Connecting to creative artists, crew, managers, producers and audiences. If you are already in this field you are somewhere in this interconnected network. If you are wanting to get involved, welcome to the ultimate work in progress. This book is all about connections and why they are the most important, valuable and motivating forces in the industry. Nathan Lively plays the role of network hub and monitors traffic in this book to give you a glimpse into the absolutely real experience of our peers and mentors in this trade. The voices in this book have vastly different viewpoints, passions, and experience. Artists who use technology for self-expression, technologists who thrive on being a conduit for artists to reach their audience, and folks who have worn many different hats. If Nathan had brought them all together in one room to discuss audio, there would be at least as many passionate disagreements as points of concordance. Two points they would all agree on are the importance of having a passion for this field of work and attention to networking and relationships. So much of this field is serial monogamy, and therefore we must be careful to maintain good relationships, not burn bridges and keep that little black book up to date with all the folks you might want to see in the future. This book examines the relationship issues that are so important for getting into, and staying in, this business.

Nathan’s choice of speakers and topics provides a mix of information and experiences that I have not seen collected in one place. The viewpoints are refreshingly honest and free of the laundry lists of gear that characterize 90% of words written about this field. These are not all superstar designers with mega-million dollar projects. Dive bars, home studios, educators, starving artists and manufacturers are here as well. The contributors are very real people in whom it is impossible not to see a part of yourself, just as much as it impossible to not find a viewpoint that you had never considered or understood before.

Nathan’s “Sound Design Live podcasts” have brought these people’s voices to the internet and will continue to do so in the future. Here and now is a collection of assembled wisdom and experience that I believe will open your mind to the many ways you can expand your role in the audio professional network.

At long last I have found some time to post here again. Well actually I don’t have the time but I did it anyway. The thing is – I left a trap in an article I wrote that would force me to make time here – and it worked!   This will be brief – or I ‘ll never get it done.

I wrote an article for Sound Video Contractor – about arrays. Click on the link and you can read it. It ended up being more in-depth than I originally planned and so it will be a two-part affair. And actually it is more in depth than even that so I have elected to post some of the data files here  – since it was just too much for a mag article.

This post contains data related to figures 3-5 in the article. What is discussed there are 8 different ways to 80 degrees of coverage – 1 box, 2,3,4,8,16,16 and finally 40 boxes. The trick here is that if you take 80 degrees and divide it by the number of boxes – you will see the splay. For example 2 boxes splayed at 40 degrees, 3 at 27, 4 at 20 etc.  The splay angle is critical but the coverage angle of the individual element plays a major part also – especially at lower quantities. case in point – the two x 40 degree array uses 2 40 degree boxes at 40 degrees. The 3x array uses 3 boxes that are 30 deg each, splayed at 27. As the quantity rises we can see that the role of the individual element becomes overwhelmed by the splay angle. In the case of the 40 box array the splay angle is 2 degrees (40 x 2 = 80 deg) but the box is a 10 degree box. The fact that this individual box is 10 degrees is not apparent in the combined shape – which makes a very sharp 80 degrees.

The complete set of data shows 10 octave resolution plots for each of the eight arrays.  All of the speakers are front-loaded woofer except for the 3 box array (which is the LF and HF horn-loaded Meyer MSL-4). Therefore it’s low frequency response is an outlier because its individual response is so much narrower than the others.  The single box, 2,3,4 and 8 box arrays use 2-way elements with relatively constant beamwidth horns.  The 16 and 40 box scenarios use line array type speakers, whose directionality increases with frequency. There are two 16 box scenarios: 16a is a smaller box with wider individual angle than the 16b ( a larger box with around 1/2 the individual angle. This was done to help demonstrate the similarities and differences when we use the exact same quantity and same splay angles but start from different elements.

Some of the trend lines to note here – you can see that from 4 kHz on up the coverage pattern is 80 degrees for ALL of the 8 scenarios. The shape of the 80 degrees can vary considerably.The single unit has the most gradual rate of loss over angle, whereas the 40 speaker versions maintains 0 dB for virtually it entire angular spread and then finally drops off like a cliff. As a continuum we can see the following trend: increased quantity  and smaller splay creates sharper edges. The dominant feature in the high quantity/low splay angle arrays is a high percentage of angular overlap. The small quantity/large splay angle arrays have low overlap, and also have softer edges. If we just look at this as a simple spreadsheet of HF coverage angle, then we see 80 degrees across the board. On the other hand, when you look at the coverage SHAPES, you see a great deal of contrast as to how the 80 degree shaper is filled.

As we move down through the midrange (250-1kHz) we see substantial variations in both shape and defined coverage angle. The array show a similar pattern where the coverage narrows and then widens below. This leaves each array with a 3-part response: expanding wider at the low end, a small transition range where the pattern narrows in the midrange, followed by a steady coverage angle above.  The frequency range where the narrowing occurs falls with rising quantity and size  (e.g. the mid-sized 2-box array constricts at 500 Hz, the larger 3-box at 125 Hz. The smaller 16 box array tightens at 125 Hz, while the larger 16 box arrays does the same an octave lower.

The last feature is the runaway low end. As quantity and size go down, the break frequency goes up. This can be easily seen by the lines flying into the top of the graph (which finishes at 180 deg). The 40 box array is the last to budge, only expanding to 100 degrees by 31 Hz.  Have fun rigging that!

This post is pretty brief – but bear in mind that this is a add-on to the article. Together they should hopefully make some sense.

Thanks for your time. Comments are welcome

And here are the files:

Here is a video from Tokyo Disney Sea taken during the quake. It was sent to me by Matt Ferguson. This sound system was designed by Roger Gans, Mike Shannon, myself and also Bill Platt. Also involved on the audio side were Richard Bugg, Francois Bergeron, Martin Carillo, and many others. We had strict design limits on the poles regarding weight – for wind and ….you got it. Each of the poles is retracted inside a chamber and then hydraulically expanded twice a day for day-time and night-time shows. This was the day show.

Here is a picture of the interior of one the speaker vaults. The speakers are already up and out at this point.  We had different sizes of poles for different areas because some locations did not needs as many speakers. Of the poles shown in the video, only the lighter weight unit goes down – but there are 44 poles total so I have no idea about the rest.

It is worth noting that alot of time and effort was put into the emergency announce capability of the system. This was something that book the Japanese and Disney engineers kept very much in focus. The announcements that you hear on the video were done in advance and loaded on to a “360” sample playback device. It was necessary to allot 30% more time for Japanese language of an equivalent phrase in English.

We played those samples MANY times through all sorts of contingency scenarios. It was a good feeling to see it come through when it really counted.

This is one of the big poles. 21 ft total

Here are a couple of the poles during a boat rehearsal.

In the big scheme of things this is very small. I was happy to see the buildings holding up there. I wish for the safety and speedy recovery for everyone there.

So it looks like 78 people took the survey. Here are the preliminary results on John Huntington’s site.  I have long ago given up any fantasies that I am a Golden Ear. My response to listening to these tracks was that I could not hear any difference. From the survey results it looks like either (A) even Golden Ears can’t tell, because…..uh…… we can’t tell, (B) John bought horn cables and then used a piano for the source. If he had used piano cable we would have heard the difference.

Ahhh… Don’t get me started!

If there was really a dramatic difference in our VERY low electromagnetic frequencies of audio between wire twisted this way – or that (just because we work a gig doesn’t mean we hear a gigahertz) ,  then think of the HUGE the difference there would be between a 1 meter and a 10 meter cable. OMG there is 10x as much wire length!  That would be NIGHT & DAY if the real world spun on the axis of the cable marketeers.  Now we know the REAL reason the Left and Right in our PA never quite match!

If you want to REALLY fix midrange mud these are some of things that might help: Turn down the monitors. Isolate the mics. Put some curtains up. Put in a midrange filter and cut. Point the speakers in the right place. Splay the speakers apart. I could write a book on it……

If you want to talk about the audio properties of cable AT LEAST center the discussion around the parts of the audio spectrum that may actually be affected by the differences in wiring topology: the extremes.

Oh crap…I got started. I’ll stop now before I really get started…..

PS: I got a much bigger difference from Pre-Beer to Post-Beer than between A and B. 🙂