A hot topic of discussion is cardioid subwoofers, so this will be the place to get that topic going. At the moment I will use this as a test to see if I can upload a few graphics from the book here.  The first will be some pics that describe the behaviour of end-fire arrays. 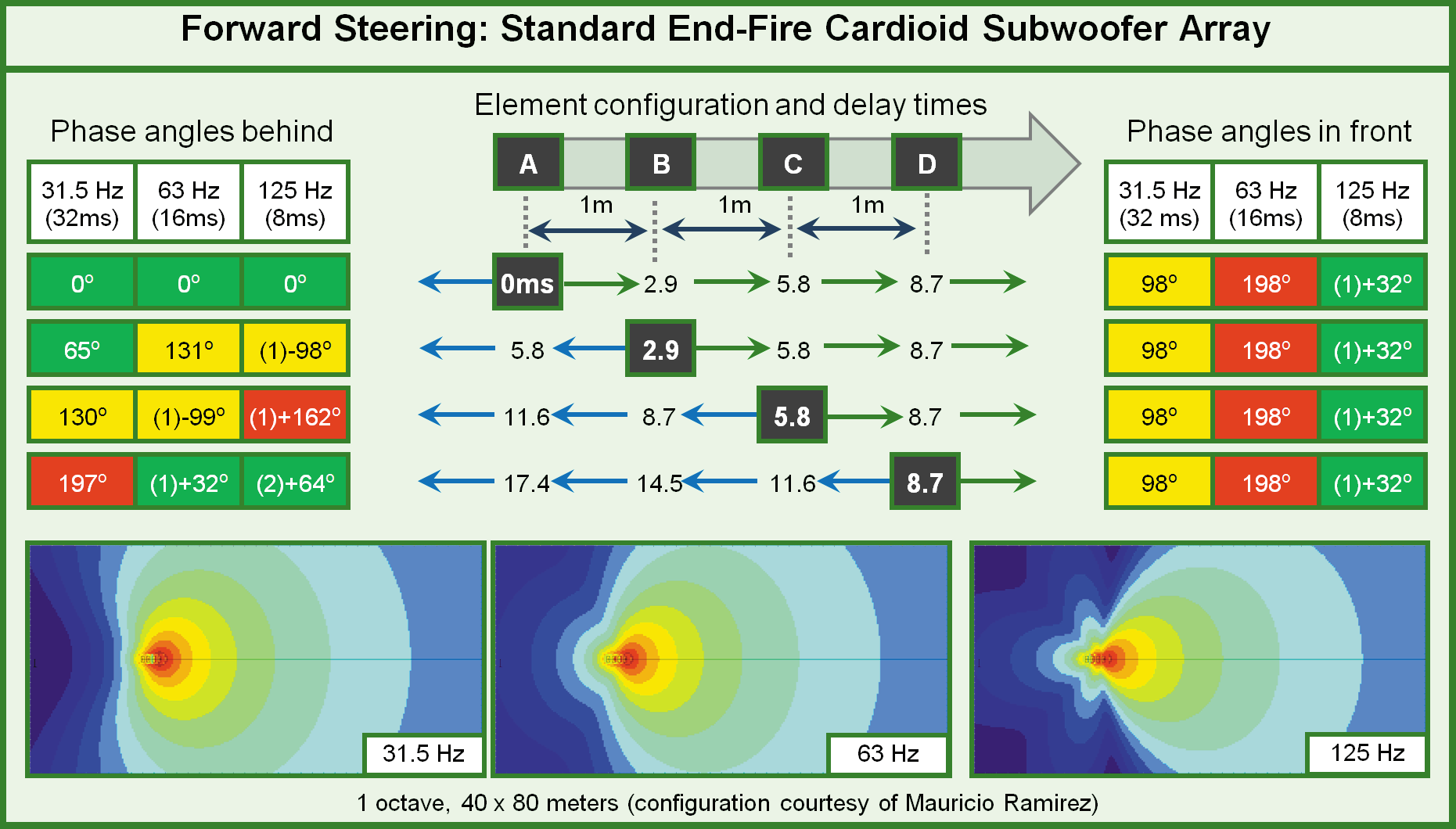 The above figure shows the timing chain for a set of four speakers in the end-fire configuration. The basic principle is a game of acoustic “leap frog” where the rearmost speakers jump sequentially over the front unit. The timing is set up so that all four speakers are synchronised at the front of the 1st (the rightmost in the figure) speaker. This “in phase” situation causes the signal to sum additively in this forward direction. The phase angles shown at the right for 3 different freq ranges are color coded to reflect their position on the phase cycle (green = +/- 90 deg, yellow = 90-120 deg and red = >120 degrees. The key item here is NOT the exact phase angle, but rather the amount of AGREEMENT in phase between the 4 speakers. In this case 31 Hz shows perfect agreement at 98 degrees so the addition wiull be strong. 63 Hz shows 4 speakers all synch’d at 198 deg and will achieve the same effect.

Meanwhile in the rearward direction (shown on the left ) the timing chain reveals four speakers out of time as they move over the rearmost speaker. The 4 elements are all at different times and range over 17.4 ms apart. The phase responses also fall apart – ranging from a 1/6 cycle (65 deg at 31 Hz) to 2.16 cycles (125 Hz) and all sorts of values in between. These disparities in phase values cause the amplitude response to sum very poorly in the rearward direction, the intended result of the design.  In sync at the front – scrambled at the rear. The side directions fall somewhere between and the end result is shown in the 3 polar plots at the bottom of the chart. 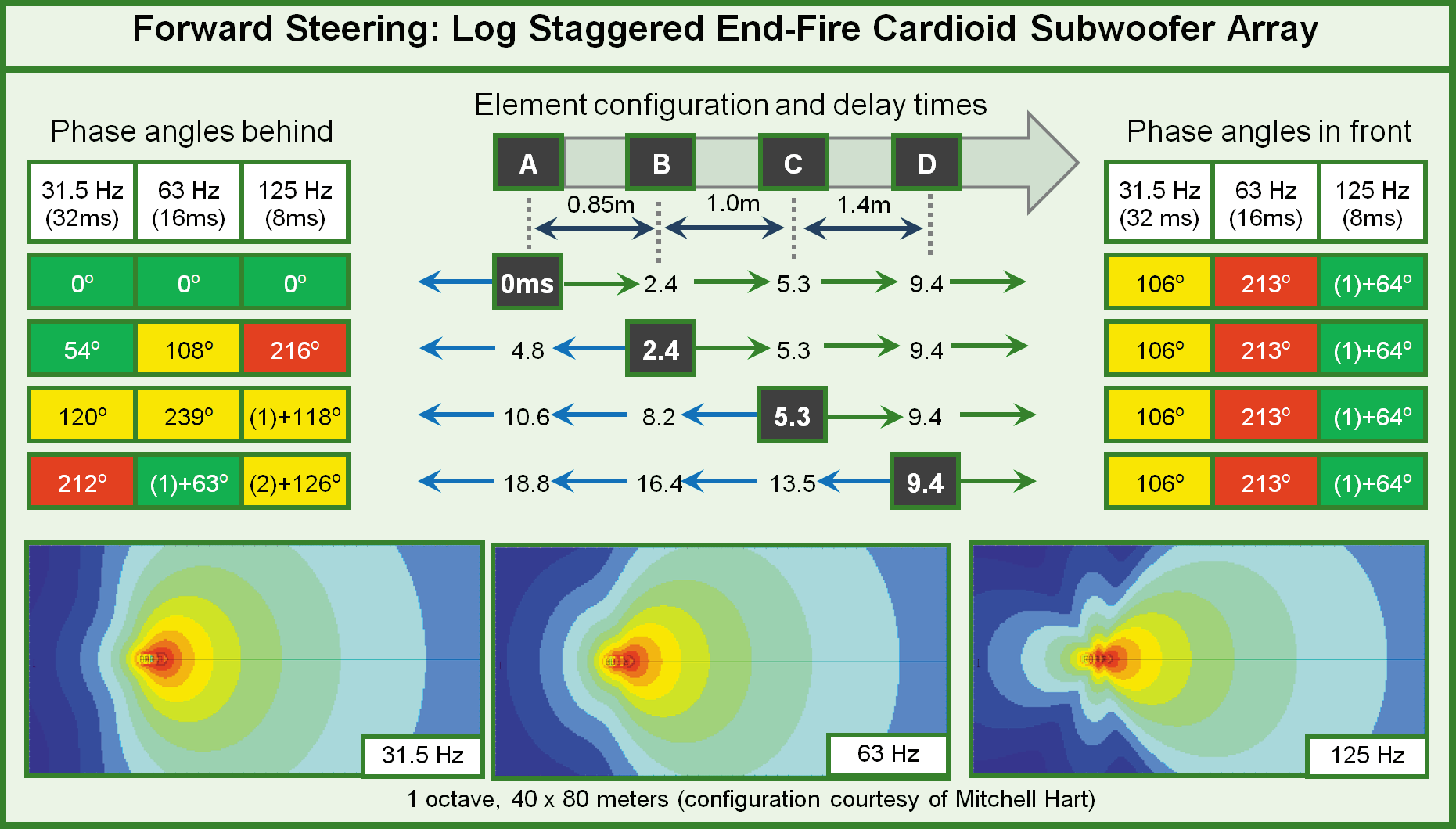 This figure shows an alternate spacing/timing configuration. Instead of a constant spacing (as the upper version shows), with a consistent delay timing, this config has a log spacing – and log adjusted timing. The leap-frog game is still played the same at the front – everybody in sync at the front cabinet, but thing play out somewhat differently at the rear. The difference is small but illustrates the options we have available to us. 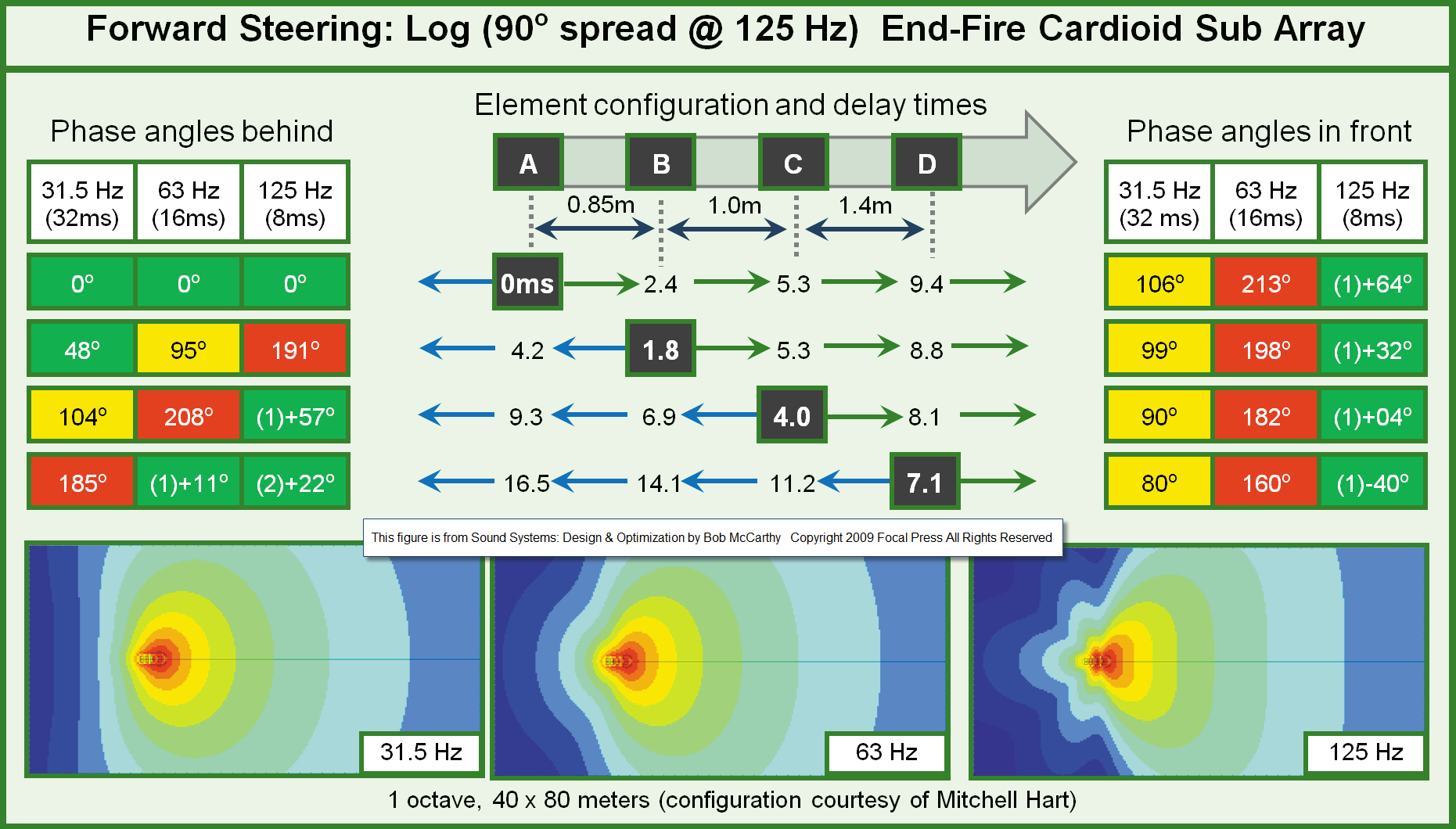 This 3rd figure has a different twist to it. In this case the intent is NOT to have perfect synchronicity at the front of the array. Instead the timing sequence is set up so that they are slightly off – such that there is about a 90 degree spread at 125 Hz, 45 degree spread at 63 Hz etc.  This creates a less than perfect addition at front/center – but causes a better addition at the front corners. The result  is a flattened front and an overall triangular shape.  This configuration was shown to me by Mitchell Hart way down in Australia.